As a St. Louis auto accident attorney, I am very concerned about design flaws that make automobiles more susceptible to crashing. That’s why a recent story in the New York Times about a Japanese inventor who argues that having separate gas and brake pedals right next to each other in cars is simply dangerous got my attention. The inventor has come up with a new design that combines both pedals into one, preventing crashes caused by “pedal confusion,” when a driver mistakenly hits the accelerator instead of the brake.
Toyota and other car makers that have been faced with lawsuits for “sticky” gas pedals have blamed driver error for the unintended acceleration. Masuyuki Naruse, 74, an inventor who owns a small factory in southwest Japan, has designed a new pedal to prevent this problem. Drivers would press one part of the pedal with a sideways motion to accelerate, and press down like on a traditional brake pedal to stop. Pushing down on the brake automatically releases the accelerator. “We have a natural tendency to stomp down when we panic,” said Naruse. “The automakers call it driver error. But what if their design’s all wrong?” Another inventor, Sven Gustafsson, came up with a similar idea, and a prototype of his pedal is being tested by regulators in Sweden. Naruse’s design is being used in about 130 cars in Japan. 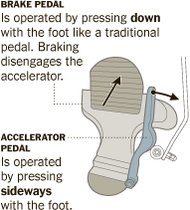 (Image from the New York Times)
The single-pedal design offers an important opportunity for automakers to invest in a new safety technology. Yet, even though it has been around for two decades and clearly offers an improvement for public safety, automakers have not adopted it. Naruse said that Toyota engineers tested a prototype of his pedal in 2000, but they didn’t like the design. In 2009 alone, 37 deaths and 9500 injuries were attributed to accidents caused by pedal confusion in Japan, according to the Tokyo-based Institute for Traffic Accident Research and Data Analysis. In the United States, auto safety experts say there have probably been tens of thousands of crashes because of pedal confusion, most notably a 2003 accident in Santa Monica, Calif., that killed 10 people when a driver accelerated into an outdoor market.
Even though drivers would have to learn how to drive smoothly with the new pedal, in my view as a Missouri car crash attorney, the prospect of preventing accidents by changing the car’s design seems worth the investment. Retrofitting cars with the pedal is not prohibitively expensive. Naruse said it costs about 100,000 yen, or $1,156, and it does not require major changes to the car’s existing braking or acceleration systems.

At Carey, Danis & Lowe, we help victims put their lives back together after a crash has hurt them and their families. Many different things can contribute to auto crashes, including design flaws that make vehicles less safe than they should be. That’s why it’s important to consult an experienced southern Illinois car wreck lawyer with special expertise in personal injury cases as soon as possible after an accident. We can help you preserve your right to recover the greatest amount of compensation from those at fault for your injuries. That includes compensation for their costs, pain and suffering, and lost quality of life. For a free consultation in which you can learn about your options, please call us at 1-877-678-3400 or send us an email through our website.

If I Received a Ticket After an Auto Accident, Was I At-Fault?